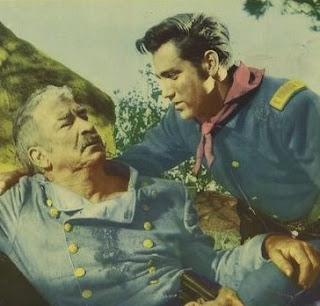 Embedded below or watch HERE.

This was not your everyday 'War Between the States' movie- I think that I should like to read the book someday.  (here)  I thought that John Fox Jr. did a good job showing how families and states were divided.

Some of the faces you may know are:
George Kennedy (We know him from LOTS of movies & TV shows...he was often the bad guy.)
Jimmie Rodgers ("The Real McCoys" & songs such as "In the Jailhouse Now", "Waltzing Matilda" and "Kisses Sweeter Than Wine"
Chill Wills was from Seagoville, Texas =)

A few of the quotes I liked were:

Chad:  "Why couldn't we be on the same side, Major? I only tried to do what I thought was right...".....
Major:  "Chad- listen and always remember this- every man on both sides was in the right who/(if he) did his duty."

Caleb:  "Where your treasure is, there your heart be also."
Chad:   "What does the bible mean by 'treasure'?"
Caleb:  "Oh, I don't know, Chad - some folks might say a loving woman."

Chad to Mellisa:  "Caleb said -- a man's treasure is a loving woman...I've found my treasure, and I know my belonging place now."