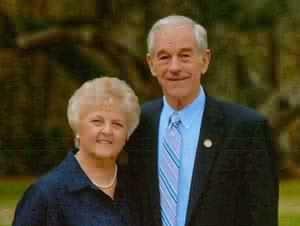 The Ron Paul I Know
by Carol Paul

The story of our family would have to start with the man Ron Paul, who saw the American Dream and decided that it could be his – and now he wants it to be yours if you so choose.
Ron's grandfather came from Germany at the age of 14 with his father. After just six months in this country, his father died and he had to make his way in a new country with a new language. He became a truck farmer in a small town in Pennsylvania. He eventually married, and had four sons and one daughter. The second son was Howard Paul, Ron's father.
Howard Paul, along with two of his brothers, continued to run the dairy that his father started from the basement garage of their home. They had horse-drawn delivery wagons. Howard was able, with an 8th-grade education, to build a dairy with 20 refrigerated trucks and a modern dairy building. Ron's mother kept the books and raised five sons, who were all born within seven years during the 1930's.
Ron was the third son of Howard and Margaret Paul, and was brought up with the ethic that you worked six days a week and went to church on the seventh. Ron's first job at age 5 was to watch his uncle wash the bottles and put them on a conveyer belt. He got a penny for every dirty bottle that he found. He was serious about his job and was very proud that he could help.
Ron delivered newspapers in grade school early in the morning. He had to put the newspapers inside the screen doors and not just throw them in the yard. And speaking of yards, he mowed a lot of lawns, and he didn't have a self-propelled lawnmower. He paid for his first year of college with newspaper and lawn-mowing money.
During high school, Ron worked in a drug store – his brothers said he worked there so he could eat ice cream whenever he wanted it – but he learned a lot about business and pharmacy that helped in years to come. He also had a part-time job painting the school in the summer and delivering furniture for a local store. In college, he delivered laundry, and he even delivered mail during the Christmas holidays. 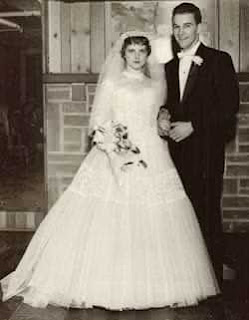 I came into the picture about 1952 when Ron was my escort to my 16th birthday party. Don't tell anyone – but I asked him... actually my birthday is February 29th and it was a Sadie Hawkins-type party where the girls asked the boys... and I asked him.
Ron was a track star in high school, winning state as a junior in the 220-yard dash and in the 440. He ran the 100 in 9.8, and that was pretty fast for the early 1950s. He was also on the wrestling team. He was president of the student council and an honor student while working and participating in sports.
A serious knee injury took him out of major track (he beat one young man who went to the Olympics), but he added swimming for therapy and soon became a member of the college swim team. He was offered a full college scholarship to run track but did not accept it, feeling he might not be able to regain his speed. To this day he exercises with bicycle riding, walking, and swimming, and feels lucky that he can do these sports.
We went away to college (different colleges in different states), but always kept in touch. On February 1, 1957, we married in a beautiful ceremony with the bridesmaids carrying armloads of red roses. The flower girl wore a white dress and sprinkled rose petals down the aisle. A fraternity brother of Ron's sang "The Wedding Prayer" and the "Lord's Prayer." Of course, both are very special to us today.
We spent his last semester in college married, and living on the third floor of an old home in Gettysburg, Pennsylvania. I worked as secretary to the faculty and attended some evening classes with Ron. For one year Ron was manager of the college coffee shop called "The Bullet Hole." He worked as steward and house manager for his fraternity, and had a small scholastic scholarship to help finance his way through college.
After college, we headed to Durham, North Carolina, where Ron attended Duke University School of Medicine. I worked as a medical secretary, and our first two children were born at Duke. We had a tiny little blue frame house that my grandmother called the "Doll House." We thought it was wonderful.
We were able to buy a registered collie for our big backyard, and she helped raise our first two children. Actually, she got us home one Thanksgiving because she had a litter of puppies – and we were able to sell one for $35, which gave us enough money for gas to drive home so the family could see our two beautiful children.
After medical school, we lived in Detroit, Michigan, where Ron did an internship and one year of an Internal Medicine Residency. I ran a dancing school in the basement of our home and taught ballet and tap dancing and baton twirling. Just to tell you what kind of budget we were on, the dancing school paid for the newspaper and for extra expenses we had when a month had five weeks!
When the Cuban Crisis came, Ron answered his country's call and became a flight surgeon in the United States Air Force. We received orders to move to San Antonio, Texas. On our way to Texas, we stopped in Pennsylvania long enough to have our third child delivered. Then we gathered up our kids and dogs and took off for Texas.
Arriving with three children from ages 4 to 3 weeks old, we loved Texas immediately. Finding out we didn't have to bother with snowsuits, mittens, and boots was an extra gift.
Even when Ron was in the military, we kept working. I learned to cake decorate, which I have put to good use over the past years. And Ron learned to fly a plane, and he worked extra emergency-room duty. They were fun-filled years. 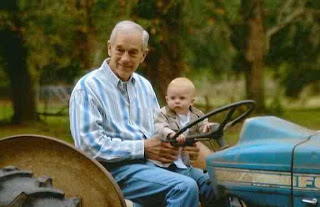 We spent Ron's tour of duty in San Antonio. When his tour was up, he completed his OB/GYN medical training, but he did stay in the Air National Guard for several years. He always believed that America should be ready to defend her borders.
Then in 1968, on July 3rd we arrived in Brazoria County, Texas, and that has been our home since that day. Ron has delivered more than 4,000 babies, and we have been married for more than 50 years. We've raised a family of five children, and they have given us eighteen beautiful grandchildren, and one great-grandchild. We have friends all over the State of Texas as well as friends throughout the United States who believe in limited government. That in itself is a testimony to a great and humble man.
So the American Dream came true for a boy who delivered newspapers, a teen-ager who mowed lawns, delivered milk, delivered furniture, delivered laundry, and delivered mail, and for a man who then delivered babies. Now that dream continues with a man who is trying to deliver the message that freedom works and that true patriotism must not grow weak in the hearts of Americans, so that we can hang on to our Republic, for which the Founders gave their last, full measure of devotion.
Carol Paul
December 14, 2007
Posted by McKee Family at 2:29 PM