When you taught me how to dance.... 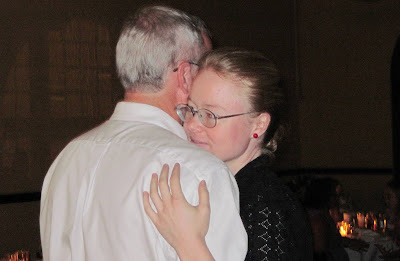 I have danced only 6 times in my life.

My first 4 were at my Aunt's wedding in 1993 when I was 8 years old~ one with my Dad, one with my Papa, maybe one with my favorite uncle, and then I paid a dollar to dance with my new Uncle. And I danced with my Aunt too!

But those were different- I was so young I got picked up. No, that's not really dancing.

And then on June 5th 2010, after my older cousin Sarah's wedding, and after dinner, I danced twice.

My Uncle Mike (his wife, my godmother, passed away just over a year ago) was so sad and serious- I kept thinking "poor guy! I would ask him to dance, but I don't know if I should".... Then when about a third of the dancing was over, Dad got Mom to the floor, and Mom told me to go get Mike and make him dance! So I tugged and pulled, and pleaded with him to please dance with me! (Yes he did protest, but I told him that he had to!)

After getting him there I had to confess that I did not know how to dance, and had no idea what to do! He tried to show me and then pointed out a very energetic young lady(who was very good) and said something about copying her. To witch I said something like that was a little to much for me... he laughed and ended up leaving me to dance around by himself. (that is okay, it was like trying to dance with Arnold!)

He had a lot of fun after that~ danced every dance after that, and headed up the squirt gun going away serenade, complete with 2 super-soakers for him self! (You should have been there- they left on Adam's motorcycle, and Sarah's helmet would not fit over her hair do! She had at least 1 package of pins in, and it took 6 hands to get them all out in a reasonable amount of time!!!)

But back to dancing......
I had mentioned to Mom (while the cake was being cut) that it was funny to me that the father daughter dance was only for Sarah and Uncle James- they did not let/ask any one else join them... And then 2 or 3 songs after dancing with Uncle Mike, Dad came hurrying up, saying come on lets dance! (or something to that effect) It was a nice song~ something about head-on-shoulder I think. I was grinning like the Cheshire Cat I am afraid! =) he even twirled me at the end! =)

I found out later that Mom told Dad what I said, and he said you really can't dance to the stuff they are playing now....(fun music but not for serious dancing)...and Mom told him that he could go and request something slow and father/daughterish.....now I know why he rushed up like he just put his nickel in the jukebox! =)

Katie Melua - "When You Taught Me How To Dance"
Posted by McKee Family at 2:55 PM