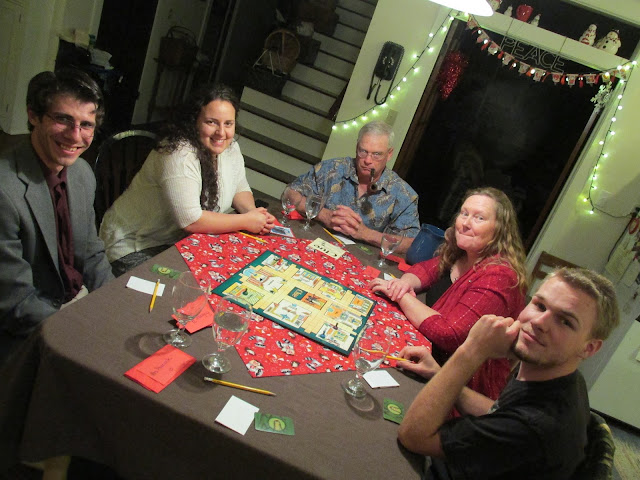 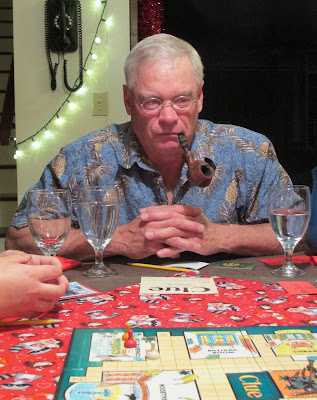 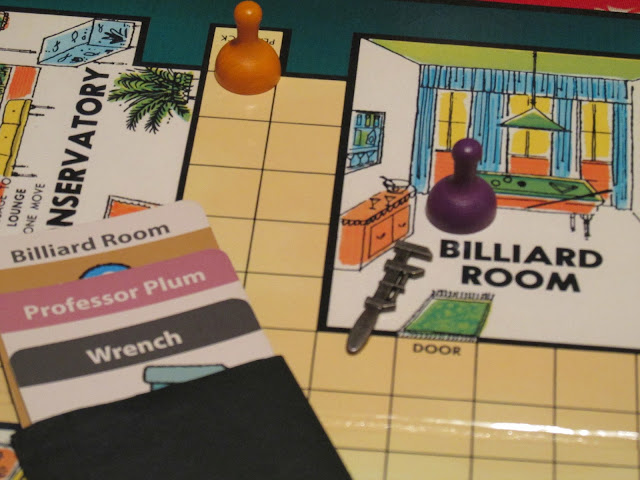 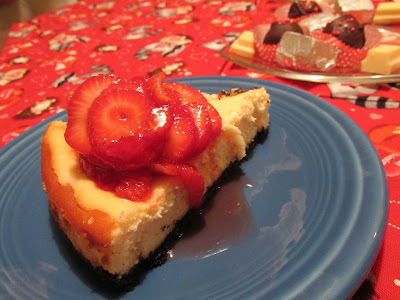 White Chocolate Cheesecake (recipe HERE)
Notes: 1) I put all 3 oz of melted chocolate into the cheesecake.
AND 2) Sprinkled a fine layer of white chips between the crust & the cheesecake!
3) I baked it in a 9" spring-form pan. =)

Some interesting info about Clue (according to Wikipedia):

"...In 1944, Anthony E. Pratt, an English musician, applied for a patent of his invention of a murder/mystery-themed game, originally named "Murder!".  Shortly thereafter, Pratt and his wife, Elva Pratt (1913-1990), who had helped in designing the game, presented it to Waddingtons' executive, Norman Watson, who immediately purchased it and provided its trademark name of "Cluedo" (a play on "clue" and "Ludo"; ludo is Latin for I play).
Though the patent was granted in 1947, due to post-war shortages in the UK the game was not officially launched by Waddingtons until 1949.
It was simultaneously licensed to Parker Brothers in the US for publication, where it was renamed "Clue" along with other minor changes.   There were several differences between the original game concept and that initially published in 1949, In particular, Pratt's original design calls for ten characters, one of whom was to be designated the victim by random drawing prior to the start of the game.

These ten included the eliminated Mr. Brown, Mr. Gold, Miss Grey, and Mrs. Silver.  The characters of Nurse White and Colonel Yellow were renamed Mrs. White and Colonel Mustard for the actual release.  The game allowed for play of up to eight remaining characters, providing for nine suspects in total.  Originally there were eleven rooms, including the eliminated "gun room" and cellar.

In addition there were nine weapons including the unused bomb, syringe, shillelagh (walking stick/cudgel), fireplace poker, axe, and poison...."

It was fun! Great idea!

I enjoy both being a part and reading of your get togethers. You are a creative person indeed!
Thanks for sharing the fun facts about game as well.

Have a Daily Cup of Mrs. Olson said...

Gosh Adrienne, this is so fun! Love how you all dressed the part and Colonel Mustard cracked me up with his "many faces". Your cheesecake looks and sounds delicious. What a fun night you had!! Thanks for sharing with SYC.
hugs,
Jann

Love your blog!
Adrienne sometime when you are over this way, can you come by the farm and help re-acquaint me with my sewing machine?

What a creative and fun idea!!

I love looking through an article that can make
people think. Also, thanks for allowing for me to comment!

There's definately a great deal to know about this topic.
I love all of the points you made.

Very nice post. I just stumbled upon your blog and
wished to say that I have truly enjoyed browsing your
blog posts. After all I will be subscribing to your rss feed and I hope you write again soon!

Very nice post. I just stumbled upon your blog and
wished to say that I have really enjoyed surfing around your blog posts.

After all I will be subscribing to your feed and I hope you write again very soon!