I'm sorry to say that I went almost 10 1/2 years before giving Emmet a bath. (I may not make a very good parent...)  I cut off his tags after Mom gave him to me, and spent years not knowing if he could be washed or not.
Then in the last 6 months I found out that he could be washed cold, and air dried, but I was afraid that he would not look good after- I mean by now he is nappy (not unlike my 20 year old cat Fergie, on the porch), and would he come out the same or worse?!?!?  (I could not hope for better)

I took the plunge, and am happy to report that other than a little separation anxiety (on his part) we were reunited after a separation of just longer than 12 hours, Emmet feels and smells better, while LOOKING about the same.  (that last point being the most important) 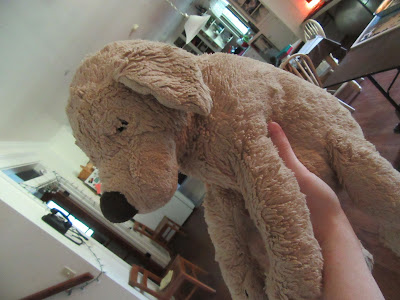 After:
(wet fur in photo, it did calm down after it dried) 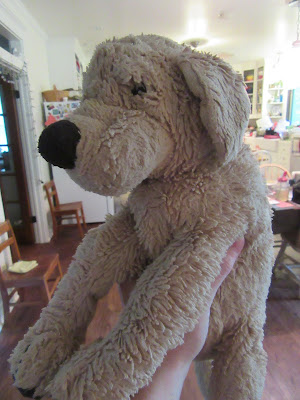