I love The Brothers Four sound.
I guess it's more of a "folk" style. What do you think? Do you like it?
(Album embedded below or listen to it HERE.) 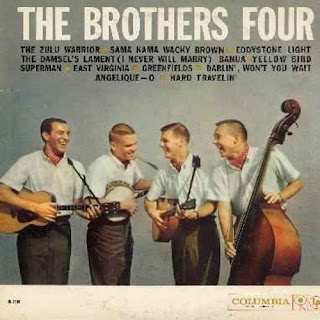 Fun Trivia:
"Bob Flick, John Paine, Mike Kirkland, and Dick Foley met at the University of Washington, where they were members of the Phi Gamma Delta fraternity in 1956 (hence the "Brothers" appellation). Their first professional performances were the result of a prank played on them in 1958 by a rival fraternity, who had arranged for someone to call them, pretend to be from Seattle's Colony Club, and invite them to come down to audition for a gig. Even though they were not expected at the club, they were allowed to sing a few songs, and were subsequently hired."