On this day (March 18th) in 1959, President Eisenhower signs a bill making Hawaii the 50th state.

Excerpt from: The Overthrow of the Monarchy By Pat Pitzer ''Spirit of Aloha,''
"...In 1887, during the reign of Lili`uokalani' s brother, King Kalakaua, a group of planters and businessmen, seeking to control the kingdom politically as well as economically, formed a secret organization, the Hawaiian League. Membership (probably never over 400, compared to the 40,000 Native Hawaiians in the kingdom) was predominantly American, including several missionary descendants. Organizer and fire brand of the league was Lorrin A. Thurston, a lawyer and missionary grandson, who would later be a leader in the overthrow of the monarchy.... 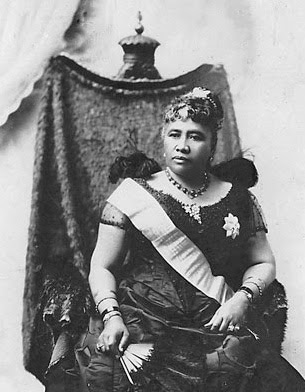 Lili`uokalani would soon face a formidable threat to the monarchy and the independence of the kingdom. In early 1892 Lorrin Thurston and a group of like-minded men, mostly of American blood, formed an Annexation Club, plotting the overthrow of the queen and annexation to the United States. They kept the organization small and secret - wisely, since they were talking treason.

Thurston went to Washington to promote annexation, and received an encouraging message from President Benjamin Harrison: "You will find an exceedingly sympathetic administration here." 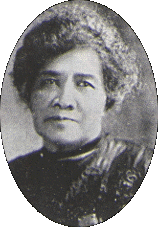 ....Lili`uokalani remained an indomitable spirit, honored and revered by her people as a queen to the end. She died in 1917, at the age of 79, still waiting for justice."

(if you have the time take a look at the web site (here), for very interesting back-story)

On 14 January 1893, a group composed of Americans and Europeans formed a Committee of Safety seeking to overthrow the Hawaiian Kingdom, depose the Queen, and seek annexation to the United States.

Why was there all this uproar? Because of a crop called Sugar & greedy American men.

Upon gaining her freedom, Lili`uokalani went to Washington, armed with documents signed by many Hawaiians asking President Cleveland to reinstate their queen. But it was now too late for him to be of further help. His term was over and he could do no more. Grover Cleveland wrote: "I am ashamed of the whole affair." ...The Hawaiians submitted a petition to Congress with 29,000 signatures opposing annexation, and petitions to the Republic of Hawaii, asking that annexation be put to a public vote. They were never permitted to vote on the issue.

~You will have to scroll down a bit to be able to read this article, entitled: "Hawaii is not legally a state!" 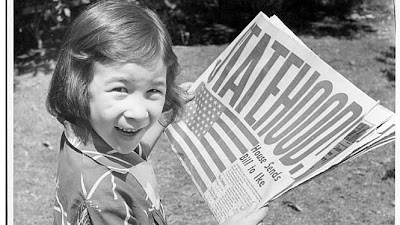 But that's enough back story...

I'm going to come back later, and read this article: Native Hawaiians.. Independence and Statehood Issues Here is a bit to pique your interest:

In 1959 Hawaii's plebiscite vote was held, and again, the United States government bent the rules. The plebiscite ballot only had the choice between statehood and remaining a territory. No option for independence appeared on the ballot as was required under the UN charter. Cheated out of their independence yet again, Hawaiians voted for the lesser of two evils (Of the approximately 140,000 votes cast, less than 8000 rejected the Admission Act of 1959.) and became the 50th state.

The history of Hawaii's transition from sovereign nation to a state of the United States is a history of crime after crime after crime, of policy put forward by proclamation and reinforced by American weapons of war, of military incursion, of violations of international law and treaties then in effect. None of the events which turned Hawaii from a sovereign nation into a part of the US was legal and above board. It was robbery, by anyone's definition of the word, with the justifications and excuses made up after the fact to make the affair palatable to an American public that still wanted to view its government as fair, just, and honorable.
In 1988, a study by the United States Justice Department concluded that Congress did not have the authority to annex Hawaii by joint resolution. The ersatz annexation was a cover for the military occupation of the Hawaiian islands for purposes related to the Spanish American war.

must watch~ Inside USA- the other Hawaii part 1: 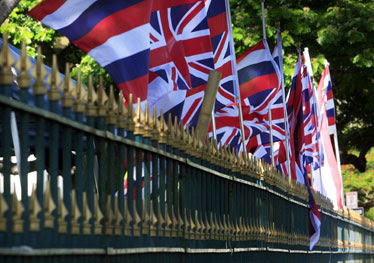 "The upside-down flag of Hawaii, which was the flag of the Kingdom as well as the State, symbolizes a "nation in distress" and is a common sight in the islands today..."

What is it with our government? Why are "we" SO wicked, and careless? What kind of people have been ruling us, and enslaving us, (as well as other countries of innocents) all these years? Will we ever stop?!?! The more I look into our past, the more embarrassed I become...but what can be done about it? ...sad sigh...

(I really was trying to have a fun history post, I thought that this subject would be light hearted...I was just as surprised as you are, by what I found!)