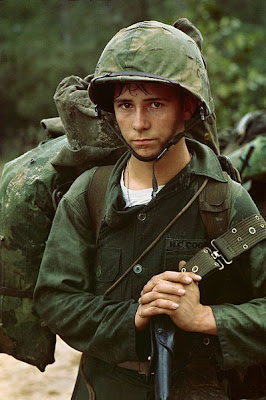 Is the Draft unconstitutional? I think so. (It certainly violates our God-given rights.) It would be constitutional to have a militia.

When the Government institutes the draft, it makes the people slaves. Or at least even more enslaved.

By instituting the draft, the Government sets itself up to be an even bigger tyrant, more odious and more hated than before.
The people, who imagined themselves free, felt that suddenly the irons of slavery where clapped to their wrists, and were now shanghaied! And for what cause? Certainly not for our own defense!

"...The modern draft has its origins in the Civil War, when both the United States and the Confederate States instituted a draft. Prior to that time, the primary source of military might in the United States was the militia, which was maintained by the states....The SSS has been in place since 1980 (I think that that is wrong too)..." ~Constitutional Topic: The Draft


Did you know that the Vietnam War was not really a war, it was a Conflict?
The US never declared war (In August 1964, Congress gave the President power to conduct military operations in Southeast Asia without declaring war.), but even so, according to the book "JFK: The CIA, Vietnam, and the Plot to Assassinate John F. Kennedy" we sent piles of munitions straight over from Japan in 1945 after WWII (and some to Korea, also). I have found that we were unofficially involved in the 1940's and 50's.
In 1961 we had 2,000 troops deployed over there, which rapidly rose to 16,500 in 1964, and before you knew it the US had reached a peak of more than 543,000 men in April of 1969.

Mom found this interesting site "necrometrics.com", you can look up just about any war (including current), and read all kinds of causalities figures. They say that we lost somewhere around 58,000 men and boys. That does not count the disabled (mentally and or physically).

Where Have All the Flowers Gone? Sung by The Kingston trio:

My favorite line of this next song is: "Hate your next-door neighbor, but don't forget to say grace"...it's as true today as it was then......
Barry McGuire singing "The Eve of Destruction":

"You're old enough to kill, but not for votin'" refers to the fact that in the United States in 1965, men were subject to the draft at age just 18, while at that time the minimum voting age (in all but four states) was 21.