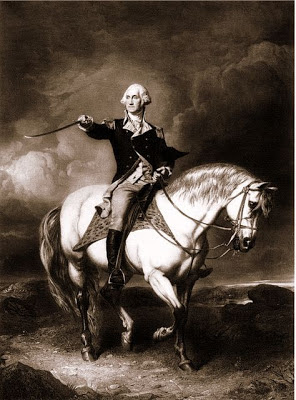 A few interesting notes I found on Wikipedia:

The first child of Augustine Washington (1694–1743) and his second wife, Mary Ball Washington (1708–1789), George Washington was born on their Pope's Creek Estate near present-day Colonial Beach in Westmoreland County, Virginia. According to the Julian calendar and Annunciation Style of enumerating years, then in use in the British Empire, Washington was born on February 11, 1731; when the Gregorian calendar was implemented in the British Empire in 1752, in accordance with the provisions of the Calendar (New Style) Act 1750, his birth date became February 22, 1732


On January 6, 1759, Washington married the wealthy widow Martha Dandridge Custis, then 28 years old. Surviving letters suggest that he may have been in love at the time with Sally Fairfax, the wife of a friend.
Nevertheless, George and Martha made a compatible marriage, because Martha was intelligent, gracious, and experienced in managing a planter's estate.
Together the two raised her two children from her previous marriage, John Parke Custis and Martha Parke Custis; later the Washingtons raised two of Mrs. Washington's grandchildren, Eleanor Parke Custis and George Washington Parke Custis. George and Martha never had any children together – his earlier bout with smallpox in 1751 may have made him sterile. The newlywed couple moved to Mount Vernon, near Alexandria, where he took up the life of a planter and political figure.

Washington opposed the 1765 Stamp Act, the first direct tax on the colonies, and began taking a leading role in the growing colonial resistance when protests against the Townshend Acts (enacted in 1767) became widespread. In May 1769, Washington introduced a proposal, drafted by his friend George Mason, calling for Virginia to boycott English goods until the Acts were repealed. Parliament repealed the Townshend Acts in 1770. However, Washington regarded the passage of the Intolerable Acts in 1774 as "an Invasion of our Rights and Privileges". 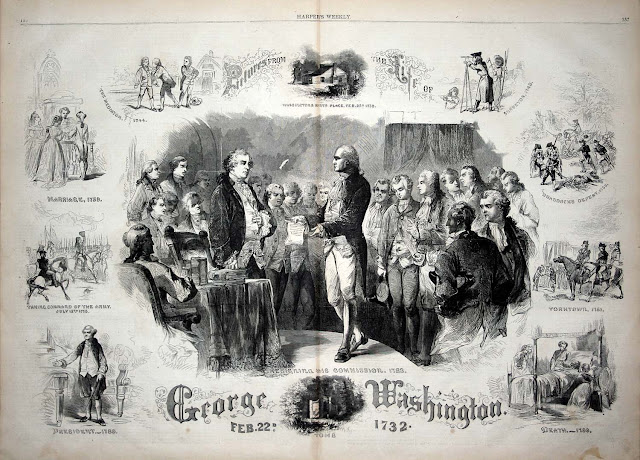 Now for a few quotes:

"While we are contending for our own liberty, we should be very cautious not to violate the rights of conscience in others, ever considering that God alone is the judge of the hearts of men, and to him only in this case they are answerable."  ~George Washington

"Be courteous to all, but intimate with few, and let those few be well tried before you give them your confidence."   ~George Washington

"Nothing is a greater stranger to my breast, or a sin that my soul more abhors, than that black and detestable one, ingratitude."   ~George Washington in a letter to Governor Dinwiddie, May 29, 1754


"My mother was the most beautiful woman I ever saw. All I am I owe to my mother. I attribute all my success in life to the moral, intellectual and physical education I received from her." ~George Washington


"Few Men have virtue to withstand the highest bidder." ~ George Washington Written in a letter to Letter to Major-General Robert Howe (17 August 1779).
Posted by McKee Family at 11:23 PM