Our babies are growing up... 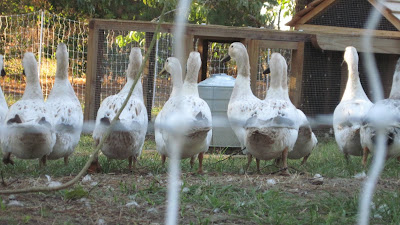 1. A couple of weeks ago, the Drakes voices changed. =( They sound kind of like Mallards. (small wild duck) Somehow I thought that they would just go on "peeping", even though the Ducks' voices changed a long time ago...(I'm not really sure when).

2. They are starting to flirt.
One evening last week, one of the Ducks was standing by herself...maybe 3-4 feet from the rest, and one of the Drakes walked up to her, and said something to her. He stood next to her, and they put their bills together, and started to quietly talk (at the same time). The other 12 heard them and immediately stopped what they were doing, and the throng noisily joined them.

3. Tonight, was the first "date night". I went out to lock them up for the night, and all was quiet, and I thought they had gone to bed. So I was praising them for being such good babies, when I spotted a duck head "slipping behind the barn" so to speak!
You guessed it: a Duck & a Drake trying to stay out all night....I had to round them up, but at least they went in willingly enough, and the Drake led the Duck in. =)