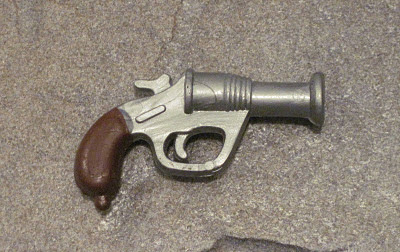 While working on my January Resolution: moving into the sewing room, or better known as "The Great Sewing Room Project", I found a box of bits of memorabilia from the McKee clan: old buttons, coins, tokens, rocks, jewelry, other stuff, and this tiny gun.

I asked Dad what he knew about it, was it G.I. Joe or something else. And he, without skipping a beat, said: G.I. Joe, the Underwater Diving set- it's a Flare Gun.
~~~~~~~~~~~~~~~~
That's my Dad! =)
~~~~~~~~~~~~~~~~
20 years ago, when we were a lot littler, my brothers and I were allowed to play with Dad's 12" G.I. Joes- We were VERY careful, and it was SO much fun to play with the toys that Dad had loved and played with. We had the best place to play with them too- in the bottom of the storage closet...the closet light being the only light on in the room!
(I actually only remember playing with Joshua, but I guess that Benjamin was there, too.

I only wish that I had let my children play with all my toys. but I am glad that some fond memories were made with those that I did share. All my love to my children!