The McCall's Giant Children's Make-It-Book was published in 1961. Because it was came out in the early 60's, it has a great 1950's feel! We inherited our copy from my Great-grandma Nina (My Mom's Mom's Mom).
My brothers and I would pour over this book for hours, trying to decided what to make, and what we wanted to make some day....and planning parties.... 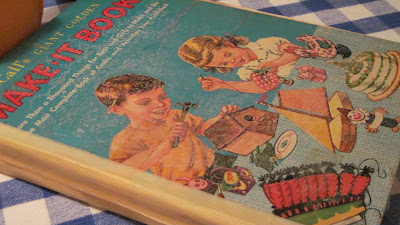 Here are a few of the projects that I have made over the years:
Actually, "We 3" all made yarn dolls. Have you ever made them? =) 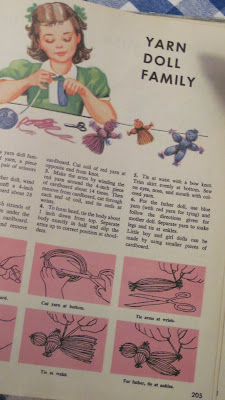 I made this Rocking Rooster several years ago, for Jacob Seekamp (so I guess that means a long time ago), but I decided that it was something that I needed to keep for relative children that could be in my life later on down the road. I stuffed him with old nylons, so I did not have a problem with stuffing wispies sticking out along the seams. 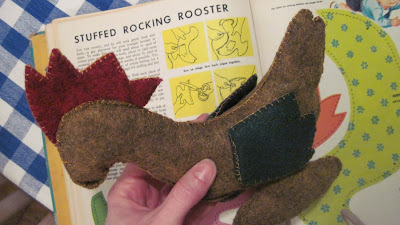 When I bought my first skein of yarn (it was pink), I made one of these for my crochet yarn...I even attached a cardboard hook holder to the side of my oatmeal can, with a cardboard lid too. I still have it, although I keep what's left of my first real tea set in it now. (My late godmother gave me the tea set for my 5th? birthday.) 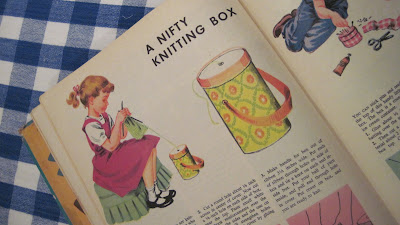 Google insisted on posting this photo sideways....I made the ladybug & the pear, for baby toys. again, stuffed with old nylons. I sewed a bell in, very securely. 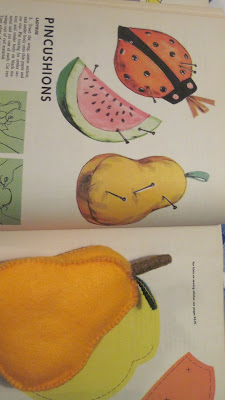 Hey! Mom sang, Puff the Magic Dragon growing up in the '70s!