Cake in a pressure cooker???  Yes. It is possible, is it the best cake ever? No. BUT it did NOT heat up the house to bake it!   We do not feel that this cake would replace a good light and fluffy cake, BUT it was WONDERFUL for a shortcake with fruit!!!

I made Julie's recipe (HERE) found over at her blog: "Instantly Delicious", I followed commenter Pamela's suggestions, and I made 3 cakes in less than a week, so I have a few thoughts of my own!  =) 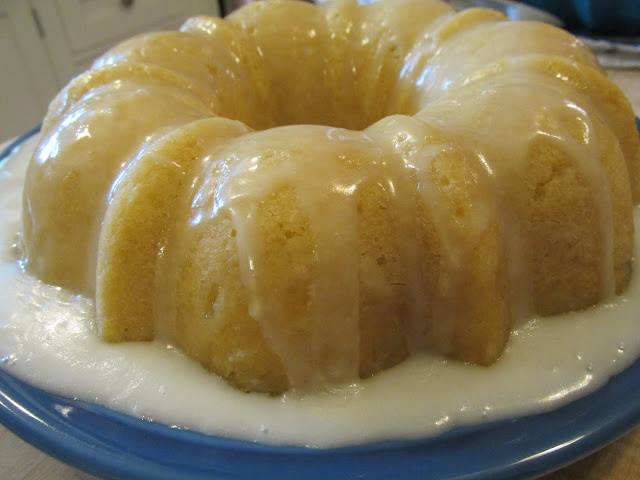 Notes:
~ I used all the zest I could get off of one lemon- more than 1 1/2 tsp! (for one cake I bloomed 3/4tsp dried from Frontier Co-op in the melting butter- it worked!)
~ SUBSTITUTE Lemon Extract for the Vanilla- you'll be glad you did.
~ Flour: I used Costco's Organic White Wheat Flour, I can't wait to try Organic White Spelt Flour.
~ Baking time & Pan:  in a 6 cup Bundt Pan cook like the recipe says, EXCEPT cook for 32 minutes.
~Is it done?  It won't "look done", but test it with a toothpick if you like.
~ Covered or not?  If you don't loosely cover (with paper towel & foil), the cake is a little shorter, but not by much, and the bottom/top of the cake looks like a dumpling & is a little chewy.  =)
~ We have an 8q Instant Pot, but I'm sure that it would work just fine in a smaller one!
~ The glaze recipe makes too much for a little bundt cake- it was DROWNING & not pretty.

Thank you for your comments! I am glad you liked the cake. I will have to get some lemon extract and give that a try!