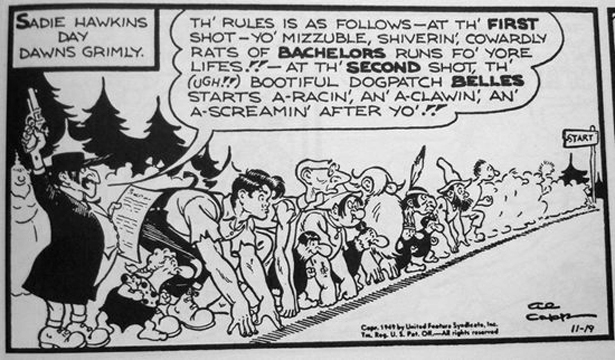 
Wikipedia also states the following under Leap Year info & tradition:
In Ireland and Britain, it is a tradition that women may propose marriage only in leap years. While it has been claimed that the tradition was initiated by Saint Patrick or Brigid of Kildare in 5th century Ireland, this is dubious, as the tradition has not been attested before the 19th century. 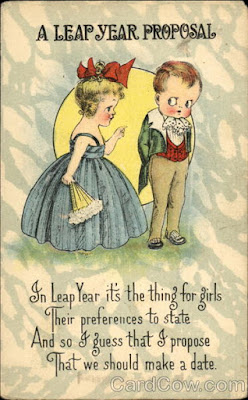 ~ In the United States, February 29 is often referred to as "Sadie Hawkins Day" signifying a gender role reversal, such as a day when a woman proposes marriage to a man.
~Supposedly, a 1288 law by Queen Margaret of Scotland (then age five and living in Norway), required that fines be levied if a marriage proposal was refused by the man; compensation was deemed to be a pair of leather gloves, a single rose, £1 and a kiss.
~In Finland, the tradition is that if a man refuses a woman's proposal on leap day, he should buy her the fabrics for a skirt.
~In Greece, marriage in a leap year is considered unlucky. One in five engaged couples in Greece will plan to avoid getting married in a leap year. 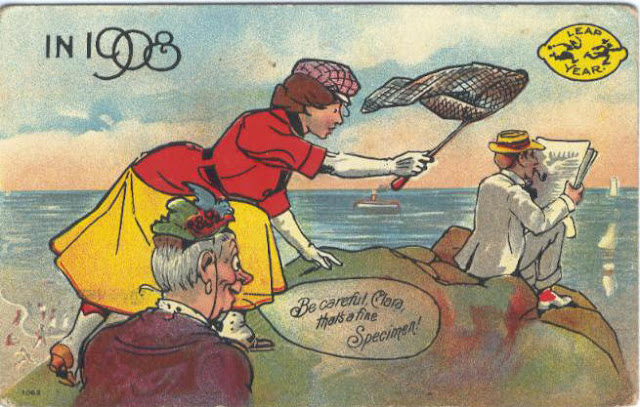 So, now we know:  today kind of is Sadie Hawkins Day.  =)
Don't worry, I'm not planning to exercise my "rights" this year!  =)
Put "leap year postcards" in the search engine to see even more fun images of the past!

I remember back in middle school we had a Sadie Hawkins Day dance....We had weekly dances then. I honestly don't remember if/who I invited! Probably someone I knew was sweet on me and wouldn't turn me down!